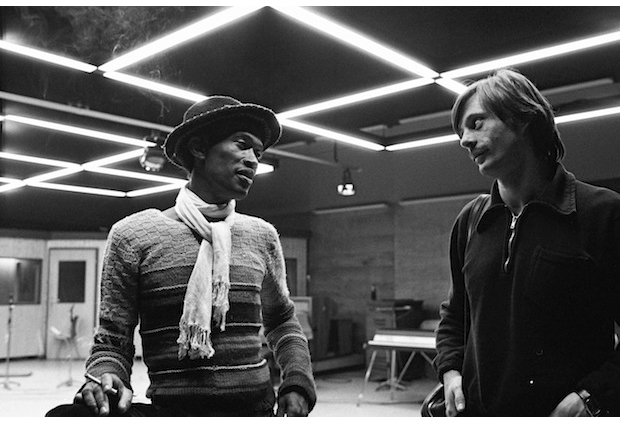 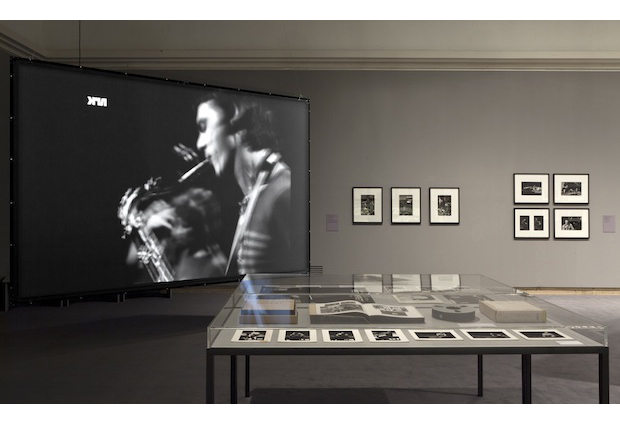 Above: Installation view of ECM — A Cultural Archeology. Photogrph by Wilfied Petzi, courtesy of the Haus der Kunst, Munich.

ECM — A Cultural Anthology is the name of a multidisciplinary exhibition organized last year by Okwui Enwezor and Markus Müller for Münich’s Haus der Kunst as well as an engrossing new catalog documenting over four decades of history issuing from, inspired by, and surrounding the Münich-based Edition of Contemporary Music. Founded in 1969 by musician and producer Manfred Eicher, ECM’s name was different from the start. Not a “label” tagged onto a varied set of recordings but something much closer to a small literary press or publisher of artists’ books, like the ones the nearby Edition Hansjörg Mayer had been publishing in Stuttgart with artists like Dieter Roth, Emmett Williams, and Robert Filliou since 1963. Frequently these books captured the uncapturable — poems that couldn’t be read, performances and happenings that left only graphic traces or elliptical photographic documentation. Eicher’s ECM attempted the same with its live recordings and studio sessions. And, like Mayer’s books, ECM’s editioned events were meticulously produced, artistically challenging, often unfamiliar, and as far as possible from what catalog contributor Wolfgang Sandner describes as “cultural fast food.”

Nowhere was ECM’s dedication to creative nourishment more clear than when it released a ten-record box set of Keith Jarrett’s Sun Bear Concerts in 1978. The edition documented an entire cycle of improvised solo piano performances across five Japanese cities — a testament to sustained, meditative concentration. And while it was easy to see this achievement as heroic, I remember being particularly touched as I lingered over the liner booklet with photographs by Klaus Knaup and Akira Aimi, stopping at a double-page spread of a street sweeper shot from above. So much of ECM and Jarrett was in these images: the broom a kind of instrument and the sweeper its player, improvising a path through the graphic markings of the street unaware but subconsciously guided by the azimuth of telephone wiring above. Each image marks a beat in time, but, taken together, they became a micro-cinema, a flicker that preserved this fleeting, solitary, humble moment in the booklet’s pages. Sun Bear was my first ECM record. It was not my last. 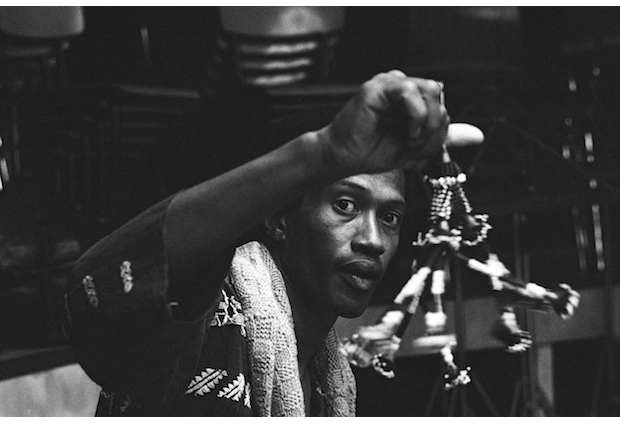 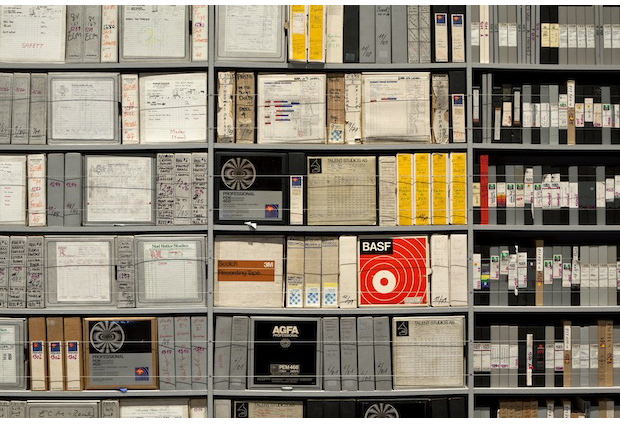 Above: View of ECM archive, as seen in the exhibition ECM — A Cultural Archeology. Photograph by Wilfied Petzi. Courtesy Haus der Kunst, Munich.

ECM’s first record was the Mal Waldron Trio’s Free at Last, and Enwezor devotes much of his essay to unpacking its complex network of influences, both historic and political. Historically, thirty years before ECM’s founding there was Blue Note, triggered by a migration of Europeans like founder Alfred Lion and label photographer Francis Wolff from Berlin to New York. These two, along with recording engineer Rudy van Gelder and graphic designer Reid Miles, established the label’s distinctive modern look, which drew on expressive wordplay and urban typographic vernacular with Miles’s covers; tightly-framed, often black-and-white portraits of musicians in Wolff’s photos; and van Gelder’s warm, up-close sound. ECM had a different perspective for a new generation of musicians. The migration was reversed, with American musicians traveling to Europe and Scandinavia to record. It was founded by Eicher, a musician and engineer with an artistic eye, who quickly hired the artist and designer Barbara Wojirsch, and, later, designers Dieter Rehm, Sascha Kleis, and Mayo Bucher to craft its look, which frequently pairs spare, International-style typography or Cy Twombly–like glyphs, runes, and expressive handwriting with images of what Eicher describes as “the inner landscape”: photographs of vast expanses like the sea or severe, distressed landscapes frequently absent of people. The aesthetic is strongly graphic, textural, cinematic, or sequential — these covers encourage listening and contemplation. Aurally, the landscape manifests itself with clear, pristine recordings that are variously described as luminous, transparent, open, and austere — Eicher’s signature sound. They act as one: the recording makes a room, the photograph a state of mind, the typography a human sense of organization or expression, the music a transformation, a transcendence, a freedom.

This last political value is the one most provocatively and persuasively explored by Enwezor and Müller’s exhibition, which staged ECM’s cultural history against the backdrop of other forms of artistic and formal dislocation and deconstruction in the 1960s. Enwezor reads Waldron’s title, Free at Last, through several lenses: freer forms of musical practice and production; free jazz itself, with its emphasis on the group and its explicit resistance to co-option by more mainstream musical culture; and finally, “the emancipatory processes set in motion by the Civil Rights Movement in the United States and the postcolonial and decolonization processes of the 1960s.” As Enwezor points out, Waldron’s title makes reference to Martin Luther King’s pivotal 1963 “I Have a Dream” speech, whose refrain is itself drawn from the music of African-American spirituals and set in motion through the metaphorical instrument of a pealing bell as freedom rings “from every city village and every hamlet, from every state and every city” until everyone can join hands and sing “Free at last! Free at last! Thank God Almighty, we are free at last!” As King departed from his prepared remarks that day, this refrain, along with the speech’s titular image, were entirely improvised. When asked if free jazz had any political meaning to him in the 1960s, Eicher responds with another musical metaphor: “I felt at home in this music because it was in tune with my thinking — the way I thought about society and life.” 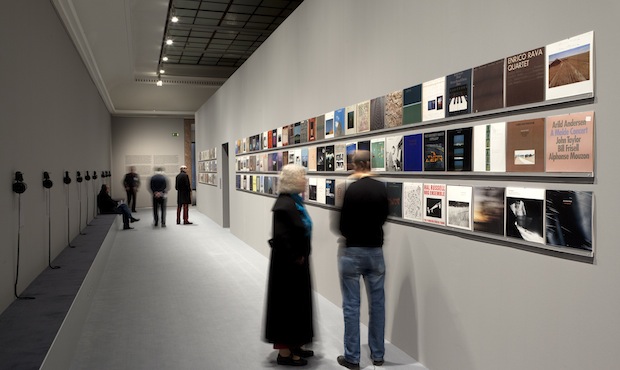 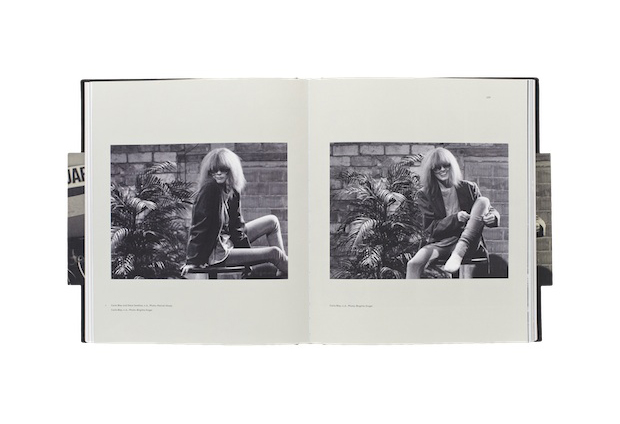 Above: Spread from ECM — A Cultural Archeology. 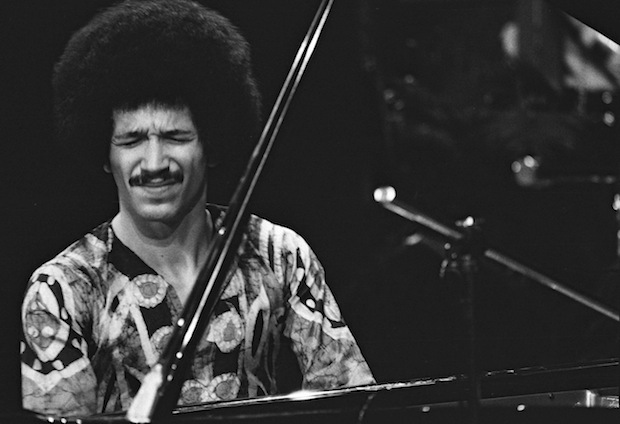 Waldron’s liner notes give Enwezor’s essay its title, “Great Big Ears,” and suggest that listening, like looking at photographs, is a deeply empathic process, a response to the turmoil of the time and a method for remaining open-minded in the future. Music-making is a deeply social endeavor, about playing and listening, interaction and translation, call and response. And ECM’s orbit constitutes a sustained effort at not just music- but world-making over its forty-three years. Eicher encourages us to “think of our ears as eyes,” and the book begins with a visual overture of sorts, echoes of ECM’s many collaborators and participants. The book’s dozens of photographs begin with a young, wide-eyed Eicher at his desk. Flipping through them, we eavesdrop on pre-concert prep, studio hangouts, laughing musicians, the breeze in the trees, the idling hum of a bus, the fizzled fry of an old boombox, the pop of flashbulbs, and, finally, a double-page spread of a ping-pong match between pianist Keith Jarrett and Manfred Eicher — the genius solo improviser on one side, and the bootstrapping entrepreneur on the other. Smiling broadly, the two friends don’t seem so much in competition as perfectly in sync. Back and forth over decades, the photos testify silently to the music that remains.

ECM — A Cultural Archeology was on view at the Haus der Kunst, Munich, from November 23, 2012, to February 10, 2013. The catalog of the exhibition is published by Prestel.