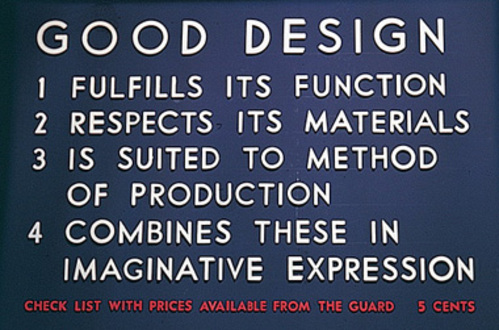 In 1942 Charles and Ray Eames produced a leg splint made from lightweight, inexpensive molded plywood, a material they would continue to refine and innovate with in the decades that followed. The object, a product of collaboration with the US military, was soon acquired for the Museum of Modern Art by Eliot Noyes, who, along with Philip Johnson and Edgar Kaufmann Jr., helped to establish MoMA’s targeted advocacy of low-cost, everyday, primarily consumer-driven design known as “Good Design” for a series of shows Kaufmann initiated in the 1950s. The impact of the Good Design movement still drives much of the popular understanding of design’s social utility and ethical objectives.

In a lecture called “Do the Math,” Bill McKibben estimates the world will have emitted an additional 565 gigatons of CO2, enough to raise the global temperature by a perilous 2°C, by 2028. The milestone comes nearly a century after the establishment of MoMA’s architecture department and its landmark survey of International Design. Peak oil will likely arrive soon after that, around the centennial of the creation of the Eames’s leg splint.

In 2008, Max Donelan founded Bionic Power around a different kind of leg prosthetic, one that harvests energy from human motion itself. Noting that granola bars have about 100x amount of energy / unit mass as batteries, Donelan shows how a simple leg brace can be used to power a light or, in an extension of the Eames’s military origins, keep soldiers in contact on-the-go. More collectively, Pacesetters, another project from 2008, proposed a platform that would allow the capture of 5–7 watts of human energy per footfall during a busy subway rush hour, enough to power a highrise building’s lights over a 24-hour period.

With the example of the Eames splint and its contemporary extensions in mind, I wonder what the 100th anniversary of the “Good Design” shows of the 1950s might look like and what social utility a centenary update might propose. What sort of ethical claims might this new show make? And how would it bring multiple products — connected, renewable, everyday, low-cost — into alignment with one another? And, because questions of energy are always related to questions of timescale, how might the political scenario be changed if these revised “Good Design” shows of 2050 were widely embraced by 2150?