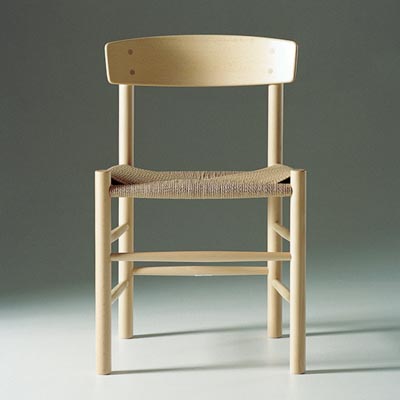 In 1927, a No. 7 armed rocking chair designed at a Shaker workshop in Mt. Lebanon, NY somehow arrived in Denmark, where it immediately captivated Kaare Klint, a leading figure in the modern movement there. It was the same kind of chair Brother Robert Wagan’s workshop had been producing since the 1870s, but the Danes had never seen anything like it, nor had they ever heard of the Shakers. Klint ordered a replica and shared it with his students. In 1947, one of those students, Borge Morgenson, designed his J39 chair, which drew heavily on the Shaker sources. The chair quickly became a familiar icon in Denmark and would soon be one of the first modern Scandinavian designs to be marketed in the U.S. by its producer, the Danish Cooperative FDB Mobler.

It might seem like this is a story about influence, and of course it is, but if you look at it that way it’s because you’re seeing things from the causal side, from the side that considers how an object comes to look how it looks and who made it that way.

Let’s say, for the sake of argument, that only the Shakers can make a Shaker chair. This is a tricky argument to make: not even the Shakers considered themselves the “makers” of the things they made. There was only one maker, and it was God. The No. 7 armed rocking chair was a gift from God. It was no more a Shaker chair as it was anyone else’s.

Nonetheless, to support themselves and their communities, the Shakers were among the first in America to try mass production, and they were so successful at it that the Shaker name became synonymous with quality. Mail-order catalogs of Shaker goods were distributed up and down the east coast of the U.S.

Anyway, one of those chairs ends up on a boat and the boat ends up in Denmark, where no one has heard of the Shakers. To Kaare Klint and his fellow Danish designers it’s just a chair but it’s not just a chair, it’s a very special chair. They copy it. Were the copy to be purchased by someone who recognized it as a Shaker chair, would that make the copy a Shaker chair? And: is it now a Danish chair also?