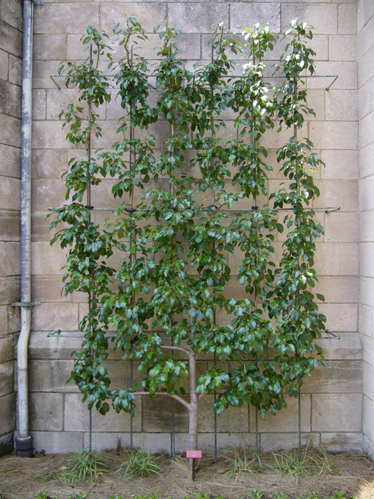 This trip to the Cloisters with my girlfriend Susan was my third trip. I have now been there a total of five times, but we have only gone together once. Most of our visit that day was comparable to my other visits. Here again was the studied precision of the religious icons and illuminated manuscripts. Here again I felt the serenity of the abbeys and the reconstituted chapels. Like anything brought brick-for-brick across the ocean, the Cloisters retains the feeling of being somewhere else. It is equal parts unnatural and magical, a place grafted onto its surroundings but somehow still living, even blossoming, as a result.

On this visit, though, I was moved to an incredibly intense degree by the sight of a pear tree. I had not noticed it before, nor have I felt so deeply for it since, tucked, as it was, against the shallow of a wall. This invisibility was part of the point. The tree was an espalier, groomed to lie flat against the stone so as not to crowd the tiny castle garden.

The pear tree faced a patch designated for “magic plants.” These plants have names like “Lady’s Mantle,” “Mandrake,” and “Scarlet Pimpernel,” names that hint at stories told and repeated, and I suspected that at least some of the magic this harvest held could be found in allegory. I have photos of these plants too and noticed them first, before the pear tree. 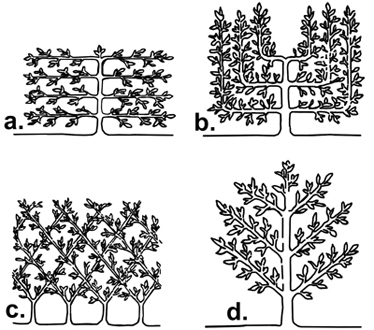 Above: Some common formal espalier patterns are Tiered or Horizontal T (a), Palmette Verrier (b), Belgian Fence (c), and Oblique Palmette (d).

Facing it finally, I was overcome by the beauty of its order. There was careful symmetry to its wispy branches, bent into the traditional shape of a Palmetto Verrier. Vibrating almost imperceptably in the breeze like a woody tuning fork, I felt its gardener’s labor and love. It was a slight but strong tree. (Espaliers are commonly more robust then their undomesticated bretheren, and earlier to fruit.) This natural thing had been made to grow a certain beautiful, ordered way. It was thriving. Its branches had been cut and split, grafted and repositioned, painfully sometimes, but still – on it grew. The tree reached skyward. In a few weeks its golden pears would be as vibrant as the sun. I wondered who might eat them and if they would be sweet to the taste.

Far off past the low garden wall, the river shone in the sunlight. Kids played on blankets in the park below us. The pear tree cast the hard shadow of its silhouette. Susan adjusted her purple dress and smiled at me from across the garden. I remember looking at all of this before we headed off for dinner.