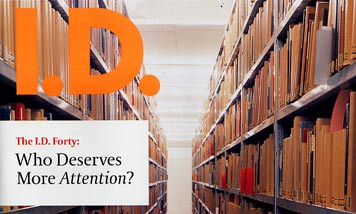 Last year’s I.D. Forty was a controversial affair. In Julie Lasky’s editorial note preceding this ranking of design’s movers and shakers, she observes that its “most important value is that it offers perspective, to us editors as well as to you.” Backpedaling from a critical stance, she asks rhetorically, “Why do I feel so defensive about the I.D. Forty? Is it that best-of lists, with their peppy exhortations of confident attitudes, look easy, when in fact they’re wrenchingly difficult?” To allay her anxiety, I.D.’s editors went for hard data, polling 800 “experts.” The result was a list of the 40 knee-jerkiest names in the design biz. In closing, Lasky quips, “The I.D. Forty grabs the zeitgeist – I have no doubt about that. As for seizing your attention, I can only hope.” (She needn’t have worried: Rick Poynor and the design community did take notice.)

This year’s I.D. Forty opens with an editorial note titled “The Fickle Finger of Fame.” In it, Lasky explains that during the process of compiling design’s most powerful, the editors uncovered some of design’s most undersung. The cover line asks, “Who deserves more attention?” If last year’s list rankled the masses by perpetuating what everyone in the design community already knew but didn’t want to talk about, this list, with its confident swagger of conferring not just affirmation but merit, seems aimed squarely at stirring the pot. Lasky admits as much: “We expect this issue to raise hackles. We hope it inspires debate about the relationship between talent, eminence, and publicity.”

For answers, I turned to a book that turned up on a number of best-of lists that came out as I.D.’s editors were compiling theirs: James English’s The Economy of Prestige: Prizes, Awards, and the Circulation of Cultural Value. English devotes his stellar book to a sociological study of a wide range of cultural prizes and awards. In so doing, he surveys the dynamics of our current cultural marketplace and evaluates the behavior of the individuals involved in that system when prizes are given, and – sometimes more interestingly – when they’re not received.

With any cultural prize, whether it’s the Nobel for Literature or the AIGA 365 Design Competition, there is a claim being made by the prizegivers on several levels. They claim, for example, that they are the ones who should be giving such a prize. They also claim that the prize is being given to the “genuine article,” a true example of what the prize stands for. Finally, they claim that a prize itself is possible to give in the arena of cultural endeavors. (All of these claims, of course, are frequently contested.)

English cites a breakdown of the first claim in the case of Beloved, Toni Morrison’s 1987 novel that failed to win both the National Book Award for Fiction and the National Book Critics Circle Award for Fiction. In response, 48 black critics and writers drafted a letter to The New York Times Book Review questioning the “oversight and harmful whimsy” on the part of the two award committees who’d failed to recognize Morrison’s book. The result? Beloved went on to win the Pulitzer Prize for Fiction, and, several years later, Morrison herself won the Nobel Prize for Literature. (As an aside, I’ve often wondered what the “Nobel” for design might be. For years, it was the Chrysler Design Awards; today, it’s undoubtedly the Cooper-Hewitt National Design Awards.)

In the end, were the National Book Awards or the National Book Critics Circle Awards harmed by their oversight? No. Was Toni Morrison a beneficiary, in some way, of this oversight? Absolutely. As English points out, “The threat of scandal is constitutive of the cultural prize.” This means that we can’t have prizes without scandals, and we can’t have others winning awards without complaining that the awards don’t mean anything in the first place. The first claim – “What gives you people the right to give an award?” – is followed by the third – “How can you give awards to art, anyway?”

In recent weeks, we’ve witnessed a similar breakdown with the popular book A Million Little Pieces (whose AIGA award-winning cover, by Rodrigo Corral, I’ve always admired). Should James Frey’s embellished memoir have received Oprah’s coveted stamp of approval? Perhaps not. But Frey will almost certainly sell more copies, and Oprah’s future choices will almost certainly come with greater anticipation and scrutiny; the prize of being a part of Oprah’s Book Club is precisely the instrument used to engineer this in both cases. (Frey’s book shot to #1 on The New York Times paperback nonfiction bestseller list; Oprah’s new selection, Night by Elie Wiesel, shot to #1 earlier this week on Amazon’s sales rankings.)

Prizes that engender scandal routinely become more significant as prizes. First, who really wants to win a prize that no one really cares about? Further, as the brilliant Louis Menand writes in his New Yorker review of English’s book, “Accusations of inauthenticity shore up our faith that there is such a thing as authenticity.” In the case of the I.D. Forty this year, the reverse of this statement may also be true. Advertisements of scandal shore up our faith that there is no scandal to be found.

In addition to the claims above, each new prizegiver enters the cultural marketplace needing to make an additional claim: the claim that the new prize addresses something that is not being addressed elsewhere. Often this “something” comes out of Claim #1 (who’s giving the prize) or Claim #2 (what the prize awards). In recent years, design, like film and writing, has seen an increase in the number of prizes offered to its practioners.

As English points out, the film industry now issues more new awards than films. Yet, when anyone browses the year’s best-of lists, they can’t help but note the lists’ selfsameness. This is because in the awards economy, the rich get richer. Prizes beget more prizes. Attention begets more attention. This accrual of prizes results, ultimately, in value for their recipients. Once anointed, these high priests of an artform can then confer this value on less-acknowledged practitioners. (Stefan Sagmeister, #9 on I.D.’s power list last year, did precisely this, and graciously, during his presentation at last year’s AIGA conference in Boston.) This also is what this year’s I.D. Forty aspires to – the role of anointer.

What makes design financially valuable, despite all this talk of “innovation,” is the recognition of its value by a wide range of audiences. Prizes are a primary mode of recognition, used widely by designers (including this one) in their own marketing and self-promotion. Am I saying that winning prizes can result in financial gain? You bet.

This makes prizes valuable in and of themselves. So not only do scandalous prizes reinforce their importance, they also help to pay their own bills. The more you want a prize, the more you’ll pay to be considered for it or others will pay to have it continue to exist. But talk like this in the prize world is, of course, very hush-hush: most design magazines would not exist without the revenues from their highly-profitable awards.

As a result, English might accuse me (and perhaps himself) of breaking an implicit taboo for what I’ve written here. He observes, “As we lose our ability or our willingness to see the prize as a fundamentally scandalous institution, there is bound to be a period of painful contraction in the awards industry.” Fewer awards? I certainly hope so. But what I really hope for are awards that get us talking, get us debating, get us passionate about what our profession’s doing, where it’s going, and who’s leading it. There are many who’ve said privately to me that this year’s I.D. Forty was their bravest yet, and, with a few reservations, I agree. But how come no one out there seems to care?

There are good scandals and there are bad scandals. Bad scandals ruin careers and embarass institutions. Good scandals get us talking about our most deeply-held convictions and beliefs. Every scandal surroundng a prize is ultimately a collaboration between its issuers and its audience.