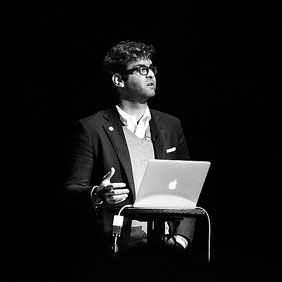 Rob Giampietro is a Senior UX Design Manager at Google in New York, working on human-centered innovation and strategy and across the Google Search and Assistant family of products. Previously at Google, Rob managed teams and projects that included the founding the SPAN Design & Technology conferences, the launch of the Google Design website, an overhaul of the Google Fonts directory including new typeface commissions, and a brand-focused expansion of the Material Design system currently in use across Google’s products. Rob was also a Design Lead at Google AI, where he helped to establish a new UX team, updated the look of Google’s AIY kits (now Coral), and facilitated outreach efforts by People + AI Research at Google.

Previous to his current role, Rob was Director of Design at The Museum of Modern Art in New York, leading a team of designers and producers on projects across all media leading up to the museum’s historic Fall 2019 expansion.

Rob has been Senior Critic at RISD’s MFA Graphic Design program, VP of AIGA/NY, and an Advisor to the Aspen Ideas Festival. From 2010–15, he was Principal at Project Projects, whose work was recognized with the National Design Award in Communication Design in 2015. Rob is the recipient of a MacDowell Colony Fellowship and the Rome Prize from the American Academy in Rome. He is a graduate of Yale University.