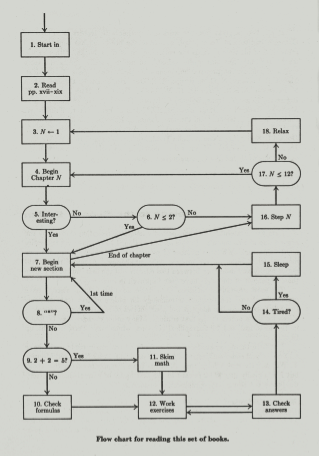 Above: Donald Knuth, introduction to Fundamental Algorithms: The Art of Computer Programming, 1968.

0 — You mentioned typesetters. While preparing the second edition of The Art of Computer Programming in the early 1980s, Donald Knuth received the galley proofs and was quite upset by what he saw. His publisher had just switched to a digital typesetting system and the typographic quality of this edition was far below the first. Knuth realized that typesetting only meant arranging 0’s and 1’s (ink and no ink) in the proper pattern, and figured, as a computer programmer, he could do something about it. He spent the next ten years developing TeX as a language for writers to directly produce high-quality typesetting. As opposed to industry-standard page layout programs that implement a “What You See Is What You Get” (WYSIWYG) paradigm, TeX produces “What You See Is What You Mean” (WYSIWYM) by using plain text files and a semantic mark-up language compiled on-the-fly to produce final pages. 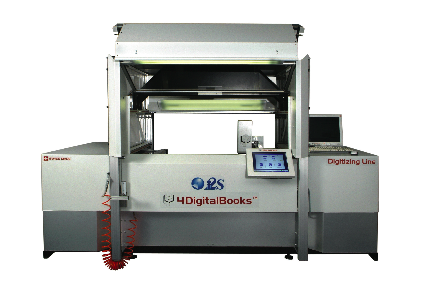 0 — During most of the time, the typesetting of a book’s pages has followed the same model—What You See Is What You Get. Typographic technologies have changed at a constantly accelerating pace from steel punch-cuts to Monotype’s lead-slugs to phototypesetting’s chemical emulsions and finally to the exclusively digital production of typeset pages. Each one of these relies on a human operator, or typesetter, to translate the texts into typographic form and compose the page. As the typesetter works, he sees the full page compositely formed before his eyes. Whether assembling metal letters in between rows of leading (while reading backwards) or preparing long typographic galleys on Linotronic paper, the typesetter sees what he is making as he is making it. Even in a digital software program such as Adobe InDesign, the operator is given a full-page interface where typesetting choices are reflected back in real time. What You See Is What You Get.

But, with the appearance of the computer, Knuth realized, another possibility had arrived. (This may be what you were getting at a while back when you suggested that “Information wants to be freed”…) Computer software can be delegated the technical work of assembling lines of letters comfortably on a book page. And this kind of brute-force automation and progressive problem solving is likely the work for which the digital computer is best-suited. So, if software can automatically perform the rote tasks of typesetting, that leaves the writer (who has also been electronically enfranchised as producer) free to make page layouts by simply instructing the computer as to what she means. The writer prepares a text that says what it says but also includes the structural relationships between the parts of the text. “This is a headline.” Or “The next paragraph is a quotation.” When this kind of text-as-structure is passed to an automated typesetting system, the result is What You See Is What You Mean.

This is where the moral objection comes in. Once the typographic decisions have been passed over to software, then the information no longer is tied to any one specific form. The possibilities multiply. It can find any of many forms from electronic text message to glossy magazine to portable document format. The transitions are increasingly fluid, increasingly automatic. But instead of prying itself from its carrier, the information becomes, paradoxically, more specifically bound to its medium. The communication is always a combination of what is being said and how what is being said is being delivered. The medium remains the message, and ever-increasingly so. 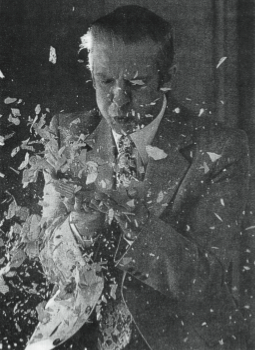 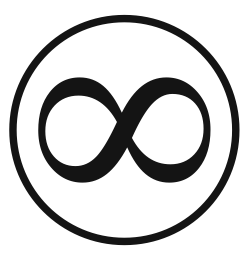 Above, top: “The Death of a Book.” Peter Waters, Chief of the Restauration Department, US Library of Congress, Washington, DC. Above, bottom: Symbol for acid-free paper, a ringed infinity sign.

1 — Ultimately, you’re right, not just about books, but about the medium of language itself. Let me try to respond by splicing several different speakers from several different sources. The first is MIT Media Lab founder Nicholas Negroponte, who wrote a column for Wired in 1996 about his newly released book Being Digital:

What weighs less than one millionth of an ounce, consumes less than a millionth of a cubic inch, holds 4 million bits, and costs less than US$ 2? What weighs more than 1 pound, is larger than 50 cubic inches, contains less than 4 million bits, and costs more than 20? The same thing: Being Digital stored on an integrated circuit and Being Digital published as a hardcover book. […] We seldom carve words in rocks these days, we will probably not print many of them on paper for binding tomorrow. In fact, the cost of paper (which has risen 50 percent in the past year), the amount of human energy required to move it, and the volume of space needed to store it make books as we know them less than the optimum method for delivering bits. In fact, the art of bookmaking is not only less than perfect but will probably be as relevant in 2020 as blacksmithing is today.

Paul Conway, the head of Yale University Library’s Preservation Department until 2001, might draw a different conclusion from Negroponte’s. In an essay also from 1996 titled “Preservation in the Digital World,” Conway writes:

Our capacity to record information has increased exponentially over time while the longevity of the media used to store the information has decreased equivalently. […] In order to achieve the kind of information density that is common today, we must depend on machines that rapidly reach obsolescence to create information and then make it readable and intelligible.

Conway compares modern information technology to the book-publishing boom of the 1850s when more books than ever were being printed smaller, cheaper, and faster. While “illuminated manuscripts and other documents from Medieval times are quite able to withstand centuries more study and admiration,” Conway notes, “Herman Melville’s Moby Dick, or The Whale, first published in 1851 on typically acidic paper, symbolizes the worldwide preservation challenges of all 19th- and 20th-Century publishing.” In cases like Moby Dick, the medium, literally, was disintegrating, and taking the message with it.

Acid-free paper wasn’t developed until the 1950s and is often symbolized today with a ringed infinity symbol appearing on the book’s copyright page. By the late 1960s and early 1970s, however, a different kind of deconstruction was challenging the book’s material (if not physical) form. Derrida opens his 1972 book Dissemination with an “Outwork,” a text that, as he explains, exists externally to the book itself.

This (therefore) will not have been a book. […] I will not feign, according to the code, either premeditation or improvisation. These texts are assembled otherwise; it is not my intention here to present them. The question here, precisely, is that of presentation. […] [The] book form alone can no longer settle—here for example—the case of those writing processes which, in practically questioning the form, must also dismantle it.

While the book form, right down to its now acid-free paper, seeks to preserve and extend, Derrida seeks to dislocate and upend all the knowledge structures represented by the book and even the tool of writing itself in search of new ones. Later in the book, he retells the story from Plato’s Phaedrus of the “old god” Theuth, who presented the King of Egypt with the gift of writing:

When it came to writing, Theuth said, “This discipline, my King, will make the Egyptians wiser and will improve their memories: my invention is a recipe (pharmakon) for both memory and wisdom.” But the King said, “Theuth, my master of arts, to one man it is given to create the elements of an art, to another to judge the extent of harm and usefulness it will have for those who are going to employ it. And now, since you are father of written letters, your paternal goodwill has led you to pronounce the very opposite of what is their real power. The fact is that this invention will produce forgetfulness in the souls of those who have learned it. They will not need to exercise their memories, being able to rely on what is written, calling things to mind no longer from within themselves by their own unaided powers, but under the stimulus of external marks that are alien to themselves. So it’s not a recipe for memory, but for reminding, that you have discovered.”

1 — But, Derrida points out that accessing that light requires Theuth’s “recipe” of writing and that this recipe is some kind of a drug—both remedy and poison. Perhaps it is true that we make books in order to forget.

Negroponte says that by making more things, smaller, cheaper, faster, and more widely accessible, we’ll get smarter. Conway warns that it was precisely making objects in this way that led to widespread rot and decay. Derrida shows that even without rot and decay a book’s material form might need to be dismantled. Plato reminds us that the very tool used to create books—writing—may have placed us in this double bind for good, between remembering and forgetting, information on or off, from zero to one and back.

This piece was comissioned by Laurenz Brunner (who also did the excellent image selection) for The Present Issue: The Most Beautiful Swiss Books 2008. Many thanks to Tan Wälchli for his careful edit of the text. Part one of this essay, “From Zero to One,” is here. See also: Gould Meets Gould. —RG