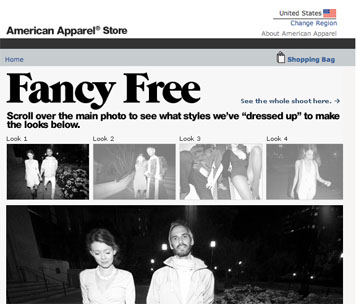 Some things are made for summer. The summer hit, for example. Recently, I’m thinking of “Crazy,” by Gnarls Barkley, “Hey Ya” by Outkast, or, this summer, Rhianna’s “Umbrella” (which you might want to stand under whether it’s raining or not). Summer brings us beach reads and popcorn flicks, and, of course, summer food – light, cool, and refreshing. Designwise, we’ve definitely got summer clothes and summer places: wear your flip-flops out on the deck or your seersucker and khakis out to your country house.

So: why not summer fonts? I can’t think of a good reason why not. Like all things summer, a summer font need only follow a few simple rules. Be catchy. Be simple. Be happy. And be gone soon enough to belong to a single summer only.

Everyone’s heard of the Summer of Love. But I predict that this summer – in nerdy font circles at least – will be the Summer of Grouch. ITC Grouch, that is. 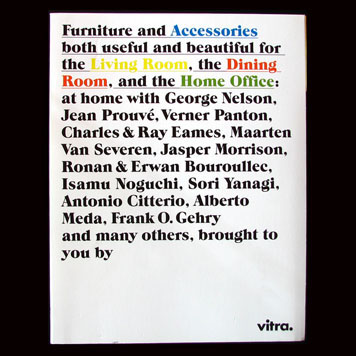 Above: “Select, Arrange” catalog by Cornel Windlin for Vitra, 2006.

I first spotted ITC Grouch on the cover of Cornel Windlin’s outstanding “Select, Arrange” catalog for Vitra at last year’s ICFF in New York. Always artfully ahead of the curve, Windlin seems to have plugged into the ’70s typographic revival that’s been happening for some time by digging up a lost vernacular gem and injecting it into a high modernist context. Grouch’s serifs pair beautifully with Vitra’s all-lowercase Futura Bold, and Windlin even uses Vitra’s quirky built-in period as the conclusion to his Grouch-y run-on sentence. Apart from a few colors and some underlining for emphasis, Windlin’s cover has one star only: ITC Grouch. With so much personalty, Grouch almost becomes a character on the cover, a stand-in for the irreverent owner of a house where all this classically cool furniture so naturally gels. The boldness of ITC Grouch swells with enthusiasm and confidence; the casualness of ITC Grouch puts its feet up on the expensive coffee table and makes it accessbile.

Reviewing the catalog in Eye Magazine, Rick Poynor adds: “What is so impressive about the catalogue is the unerring accuracy with which it strikes the right contemporary note. These are luxury objects conceived by some of the finest designers, manufactured to exacting standards and with price tags to match, but they don’t want to appear to be trying too hard, standing on ceremony, or making a fuss.” Windlin recently won a Swiss Design Prize for his efforts.

Once ITC Grouch had entered my bloodstream, I found it hard to get rid of. As soon as this summer kicked off, I saw it used in serveral of American Apparel’s ads. Then, strolling into a local Nolita bookstore, I found myself face-to-face with it on the cover of the Walker Art Center’s new Kara Walker book. Following this cultural hat trick, it seemed a summer font was decidedly afoot, and I set out to learn more.

Above: “Kara Walker: My Complement, My Enemy, My Oppressor, My Love” catalog by Andrew Blauvelt & Emmet Byrne for the Walker Art Center, 2007.

ITC Grouch was designed by Tom Carnase with Ronnie Bonder in 1970 while Carnase was vice-president and partner of Lubalin, Smith, Carnase Inc with along with noted typographers Ernie Smith and Herb Lubalin. American Type Founders (ATF) – already proud parents to Oz Cooper’s Cooper Black and Pete Dom’s Dom Casual – were reviving turn-of-the-century Caslon poster typefaces when ITC decided to jump into the ring.

Bonder and Carnase’s typographic sensibilities seem enmeshed with the cultural fabric of the early ’70s. As Mungo Jerry’s “In the Summertime” played on the radio, 1970 brought not just ITC Grouch but ITC Machine, these days most recognizable from its use on the Blockbuster Video logo; ITC Busorama, immediately used for the first brand of mass-marketed pantyhose, L’eggs; and the classic ITC Pioneer, which by 1971 had a starring role on the poster of Shaft. At the same time Carnase was collaborating with Lubalin on his well-known typeface Avant Garde Gothic, and in 1973 Carnase drew the scripty Saks Fifth Avenue logo recently rivived and slightly redrawn by Pentagram. Carnase, now nearly 70, is still practicing in Miami, FL, where the weather, as in American Apparel’s L.A., is always distinctly summer-like.

In addition to all the sequels, backbeats, and gazpacho, summer also brings us the summer fling. How long will our love of ITC Grouch last? Who knows. But don’t fall too hard too fast, because this font is literally off-the-market. According to Mark Simonson, “The Bitstream version seems to be the only digital version of this font. ITC doesn’t even carry it. It was one of the first fonts they released in 1970 when they began and it’s almost like they have disowned some of those early releases. Not hip enough for them, I guess.” At least until I have to put a coat on, I beg to differ.