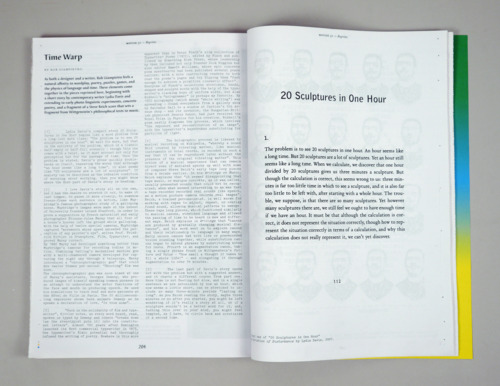 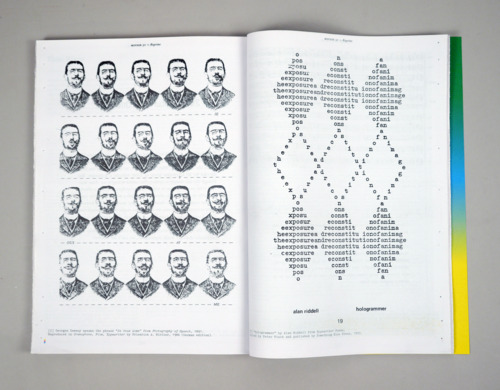 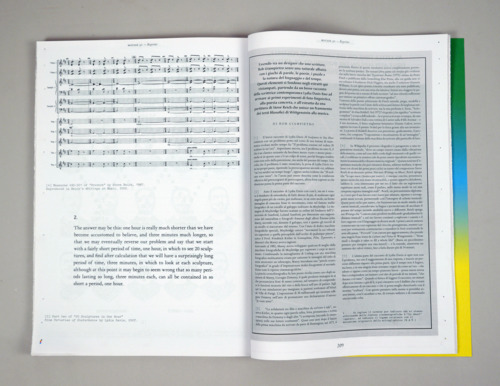 Above: Time Warp as published in Mousse #30.

Each issue, the editors at Mousse invite a contributor to select a text or a group of texts to be reprinted in the magazine as part of their section “Reprint.” The reprinted work may be an article, a short essay, a piece of narrative, or something else, but the original layout is always kept. The scans are accompanied by a text/introduction by the contributor. I was delighted when they asked me to contribute and enjoyed the selection process enormously. The simple act of choosing a set of things and then writing something that helps to connect them was a productive one for me. My thanks to them for the opportunity, and for making it look great. — RG

Lydia Davis’s compact story “20 Sculptures in One Hour” begins like a word problem from a long-lost math class: “The problem is to see 20 sculptures in one hour.” We wait for more, but that is the entirety of the problem, which is a classic half-empty or half-full scenario — though this one comes with a twist, as it must account not only for perception but for the passage of time. Once the problem is stated, Davis’s prose quickly double-backs on itself, repeating the worry that although “An hour seems like a long time” it also seems like “20 sculptures are a lot of sculptures.” If anxiety can be described as the reflexive condition of worrying about worrying, then you might know where the first part of Davis’s story is heading.

I love Davis’s story all on its own, but I had the desire to stretch it out, to make it last longer, to parse it more closely, to somehow freeze-frame each sentence in motion, like Muybridge’s famous photographic study of a galloping horse. Muybridge’s images were made at the behest of university founder Leland Stanford in order to prove a supposition by French naturalist and early photographer Étienne-Jules Marey that all four of a horse’s hooves left the ground while galloping. With the help of twelve special cameras, Muybridge captured “movements whose speed exceeded the perception of any painter’s eye,” writes Prof. Friedrich Kittler in Gramophone, Film, Typewriter, and proved Marey correct.

By 1882 Marey had developed something better than Muybridge’s cameras for recording bodies in motion. Combining Gatling’s mechanized machine gun with a multi-chambered camera developed for capturing the night sky through a telescope, Marey introduced a “chronophotographic gun” that could fire twelve frames per second. “Shooting” film was born.

The chronophotographic gun was soon aimed at one of Marey’s assistants, Georges Demeny, who produced images of himself speaking common phrases in an attempt to understand the motor functions of the face and mouth in producing speech. He used his simulations to teach deaf and mute patients at the Hôtel de Ville in Paris. The 20 millisecond-long exposures shown here animate Demeny as he speaks a declaration of love, “Je vous aime.”

“Such is the solidarity of film and typewriter,” Kittler notes, as every word heard, read, spoken or typed by Demeny and others “breaks down (as the stenotypist puts it) into its constituent letters.” Almost 100 years after Remington launched its first commercial typewriter in 1873, the typewriter’s filmic potential had throughly infused the writing of poetry. Nowhere is this more apparent than in Peter Finch’s slim collection of Typewriter Poems (1972), edited by Finch and published by Something Else Press, whose leadership by then included not only founder Dick Higgins but also editor Emmett Williams, whose epic concrete poem sweethearts had been published several years earlier with a note instructing readers to both read the poems’s pages and try flipping them “fast enough to achieve a primitive cinematic effect.”

Every one of Finch’s selections stretches, bends, shapes and sculpts words with the help of the typewriter’s clacking keys of uniform width, but Alan Riddell’s “hologrammer” is perhaps my favorite. By 1972 holography (which means “whole writing”) was spreading — found everywhere from a gallery show by Salvador Dalí to a window at Cartier’s 5th Avenue shop — and its inventor, the Hungarian-British physicist Dennis Gabor, had just received the Nobel Prize in Physics for his creation. Riddell’s poem neatly diagrams the process, which involves “the exposure and reconstitution of an image,” with the typewriter’s keystokes substituting for particles of light.

The holographic process is likened to musical recording on Wikipedia, “whereby a sound field created by vibrating matter, like musical instruments or vocal chords, is encoded in such a way that it can be reproduced later without the presence of the original vibrating matter.” This notion of a musical experience that can remain direct even if mediated synchs up well with some of composer Steve Reich’s early tape loop pieces from a decade earlier. In his Writings on Music, Reich explains that “it seemed disappointing that tape music, or musique concrète as it was called, usually presented sounds that could not be recognized, when what seemed interesting to me was that a tape recorder recorded real sounds like speech, as a motion picture camera records real images.” Reich, a trained percussionist, is well known for working with tapes to adjust, repeat, or overlay found sound, allowing musical patterns to emerge.

These tape loop pieces, which functioned similarly to musical canons, stretched language and allowed the passing of time to be heard in new and different ways. Reich explains in Writings that “canons are produced by gradually changing musical distances” and his work went on to explore canons and their relationship to language in many ways. Early unison canons had both live or prerecorded voices sounding together, while substitution canons began to extend phrases by substituting notes for rests. “Proverb” is an augmentation canon, taking a single phrase found in Wittgenstein’s Culture and Value — “How small a thought it takes to fill a whole life!” — and elongating it through augmentation to over 14 minutes.

The last part of Davis’s story opens not with the problem but with a suggested answer, and it charts a different course from part one. Here time is not fleeting but slow, and in a single sentence we are astonished by how an hour, which now seems a little short, can be stretched to include so many three-minute periods “lasting so long.” As you finish reading the story, maybe three minutes or so after you started, you might be left wondering if it’s really a story at all, or if a sculpture wouldn’t be a better word for it, and, turning this over in your mind, you might feel tempted, as I have, to circle back and scrutinize it a second time. 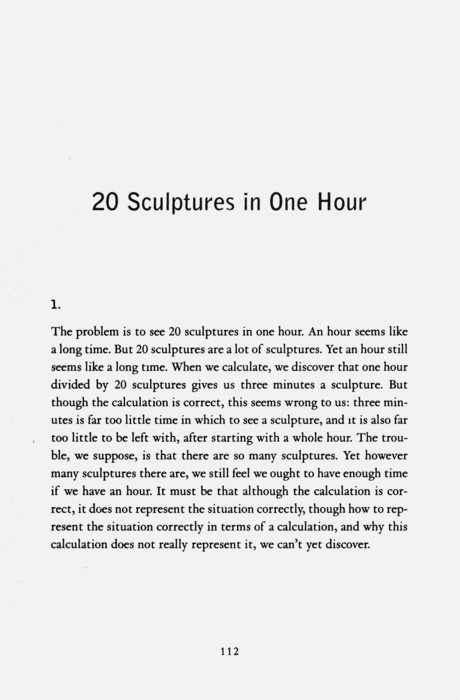 Above: Part one of “20 Sculptures in One Hour” from Varieties of Disturbance by Lydia Davis, 2007. 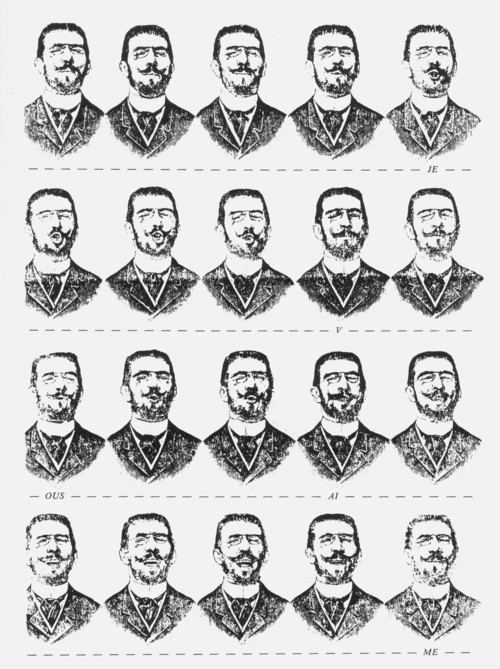 Above: “hologrammer” by Alan Riddell from Typewriter Poems, edited by Peter Finch and published by Something Else Press, 1972. 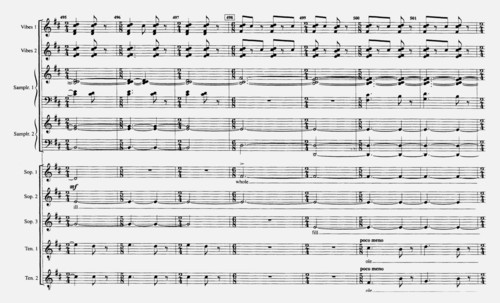 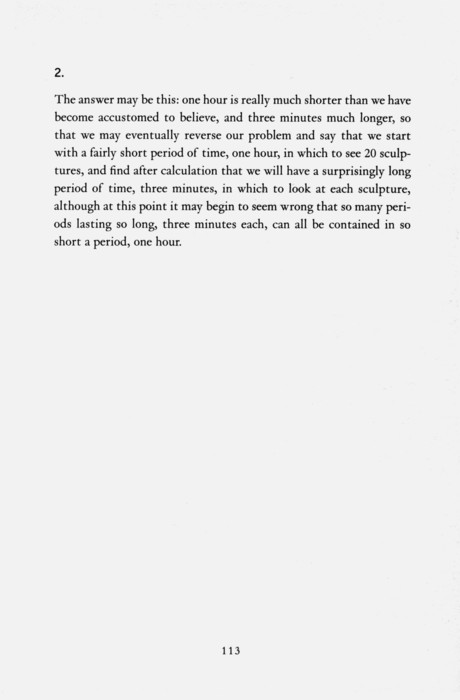 Above: Part two of “20 Sculptures in One Hour” from Varieties of Disturbance by Lydia Davis, 2007.