In the well-worn metaphor of a school as a garden where minds grow, blossom, and bear fruit, cultivated and protected yet organic and natural, we might as well adopt (and adapt) one of the earliest methods for the proper planting and spacing of apple trees in an orchard, the quincunx, as the emblem for our work. 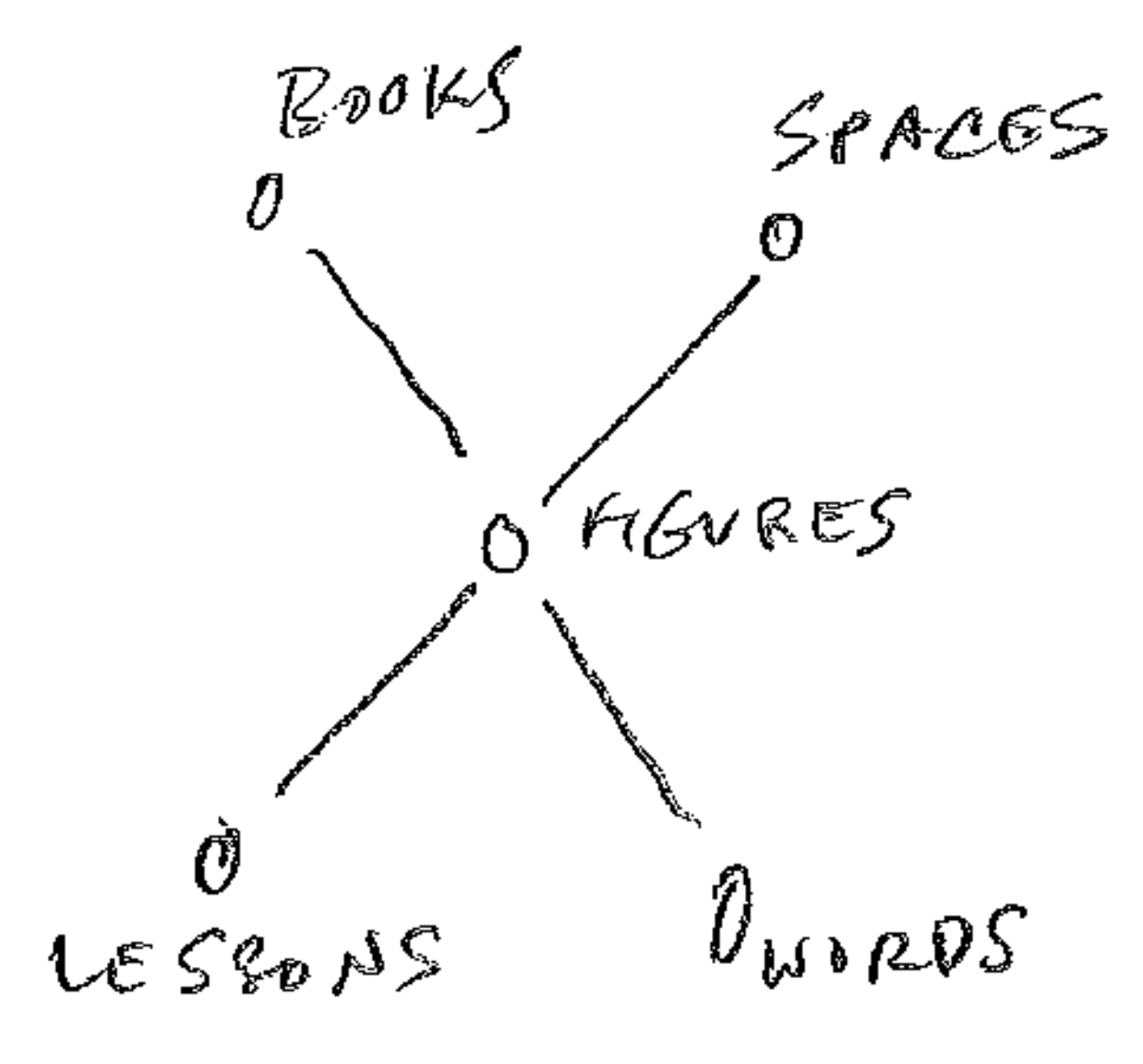 In so doing, we can plant our five interests for this session at each one of its nodes: books, spaces, lessons, and words on the outer set, with figures alone on the inner node. Visiting this entire set of points without double-backing on one of the nodes is impossible, but the sets of three terms that we are able to visit on a single trip plot a more articulated set of interests than the words alone. The way that figures from lessons find their way into words, for example, or how the figures from floor plans or city maps might be remapped to a catalogue or guidebook. How words might be plotted along a path to result in a book, how a lesson organizes a set of views on a particular topic, and so on. The plotting gives us a sense of order and shape, and yet there are not five but six discrete paths through the quincunx, so some new sense beyond the the points alone has emerged. This is the problem before each of you with the thesis — to take points of effort or insight and give them a shape, to hang them in space, to form them into a book, to teach with them, to write about them, and for something new to emerge from these repeated acts of positioning and repositioning.

For these efforts, we’ll depart from the well-worn class critique structure and use the informality and procedures of the writing workshop. You’ll submit papers in advance to this group, we’ll read them, and we’ll select a subset for discussion in class (so be sure to come with all of them read/reviewed in advance). We will generate rather than refine, we will force new groupings from the projects rather than revisit pre-existing ones, and we will suggest both new project opportunities and research areas from these efforts, looking at how the individualized maps you each create might suggest approaches and stakeholders for a more collective space. Rather than evaluate “final” work at this interstitial and inflected point in your thesis progress, I will pay close attention to your engagement with the assignments and with one another. Because participation and preparation is the entire point of the workshop, please plan ahead to make sure you’re able to attend each of the sessions, including those in NYC, and that you’ve set aside time to do the important work on the assignments below. They appear simple and might be done in minutes, but they reward longer and more sustained preparation.

Looking forward to the weeks and work together ahead.

Readings / screenings for class discussion Note: Please do all readings listed, and work with your thesis group during reading week to prepare the assigned reading for class presentation as listed above.

I think it’s also helpful to read three essays by recently departed writer William Gass — my lecture in the first class will touch on aspects of these, but they’re valuable to spend time with outside of that:

Other structures, other directions 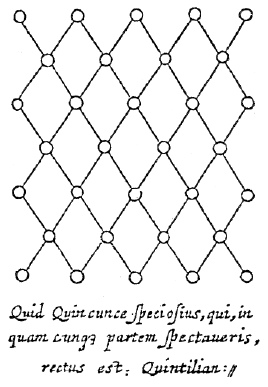 Thomas Browne’s diagram of the quincunx from The Garden of Cyrus (1658), as reproduced by W.G. Sebald in The Rings of Saturn (1995) 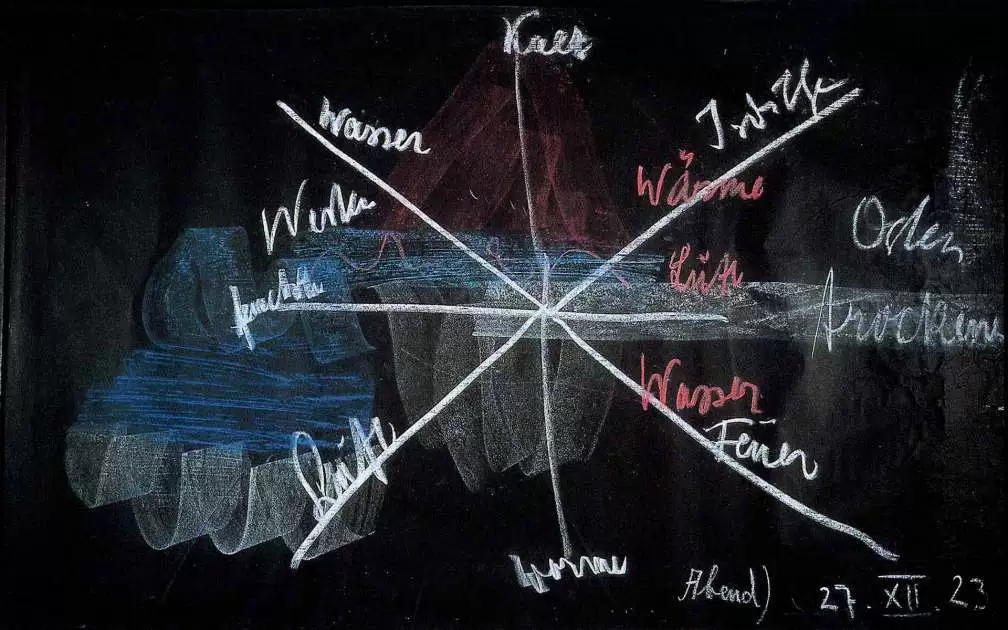 That’s one of the things, structurally, that’s going on [in Infinite Jest]. It’s actually structured like something called a Sierpinski Gasket, which is a very primitive kind of pyramidical fractal, although what was structured as a Sierpinski Gasket was the first– was the draft that I delivered to Michael in ’94, and it went through some I think ‘mercy cuts’, so it’s probably kind of a lopsided Sierpinski Gasket now. But it’s interesting, that’s one of the structural ways that it’s supposed to kind of come together. […] It’s kind of a design that a man named Sierpinski I believe developed — it was quite a bit before the introduction of fractals and before any of the kind of technologies that fractals are a really useful metaphor for. But it looks basically like a pyramid on acid… 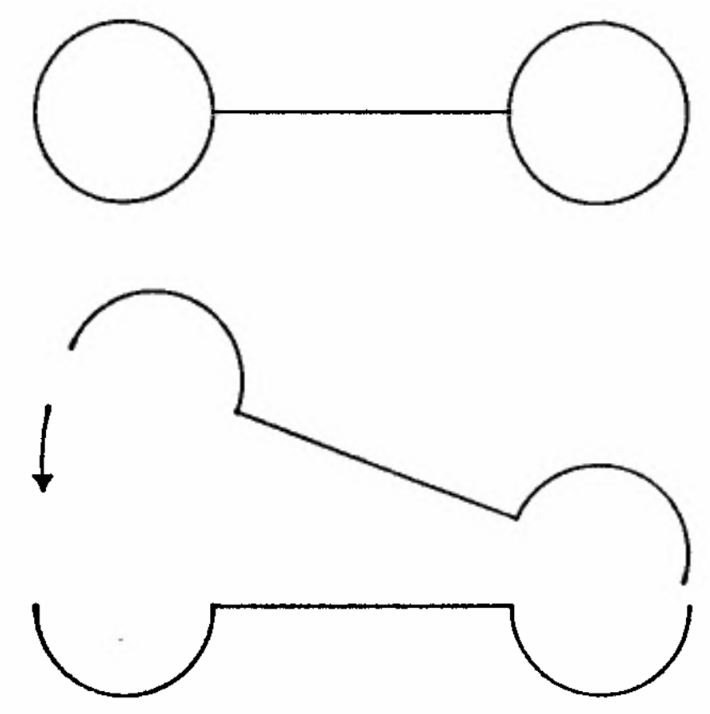 Diagram by Edward de Bono from “Alternatives” in Lateral Thinking (1967) 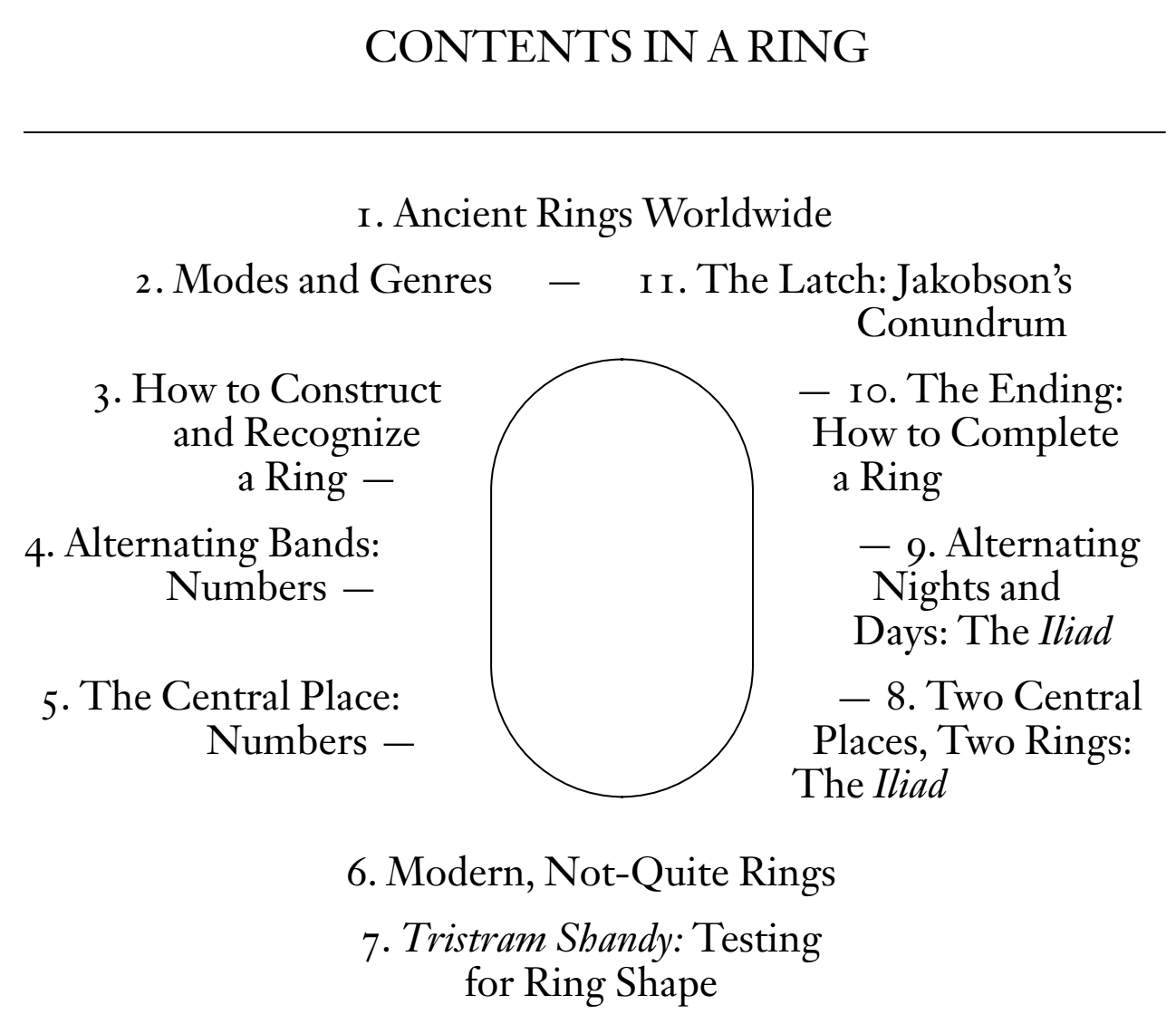 Table of Contents from Thinking in Circles: An Essay on Ring Composition by Mary Douglas (2007) 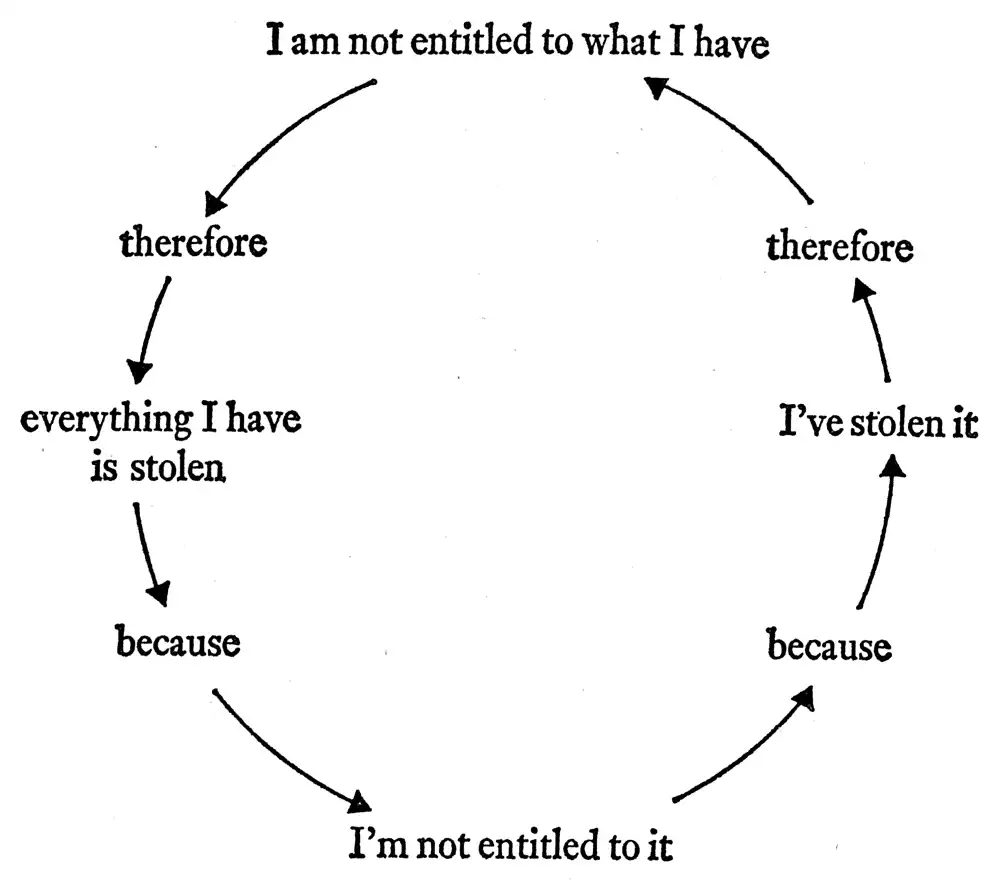 Writers have proposed other shapes or patterns for narrative, too. Italo Calvino says that in Invisible Cities he was thinking of a crystal’s shape and “built up a many-faceted structure in which each brief text is close to the others in a series that does not imply logical sequence or a hierarchy, but a network in which one can follow multiple routes and draw multiple, ramified conclusions.” […] And Joseph Frank launched much of this discussion with “The Idea of Spatial Form,” where he describes a kind of fiction in which juxtaposition or association replaces temporal order, sense not arising from linearity but from puzzle-like compositions or networks.   I was looking for ways to create forward motion in narrative that didn’t rely on the linear arc when I happened upon W. G. Sebald, twenty years ago. In The Emigrants, he seemed to work with patterns that yielded connections and meaning, rather than anything linear. Since then, I’ve sought powerful narratives with structures other than an arc, structures that create an inner sensation of traveling toward something and leave a sense of shape behind—not just slice-of-life. I dissected some of the most effective, unusual narratives to see what they had in common, and what I found: shapes recurring in these texts coincide with core patterns in nature. 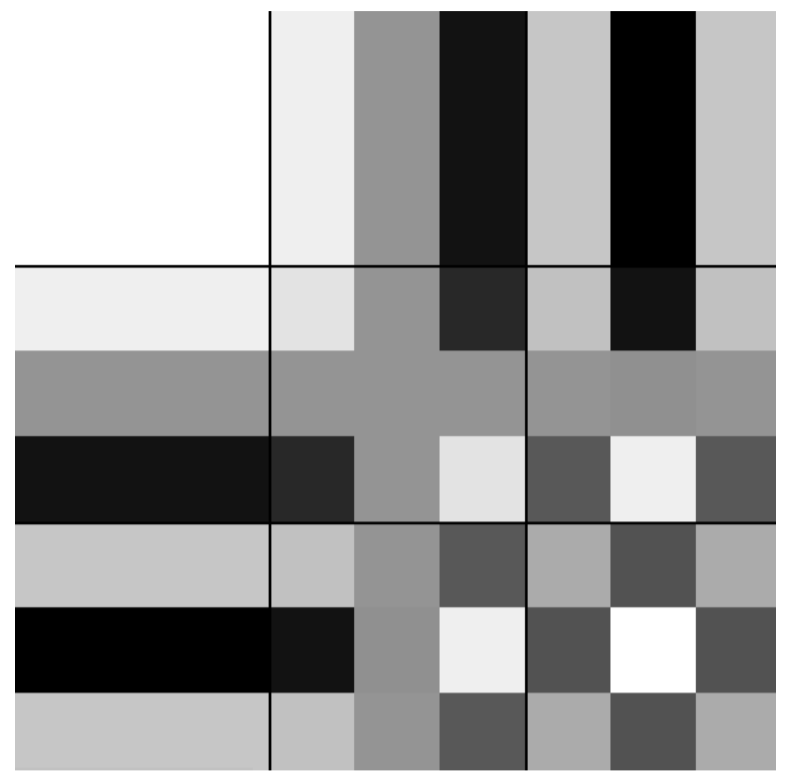 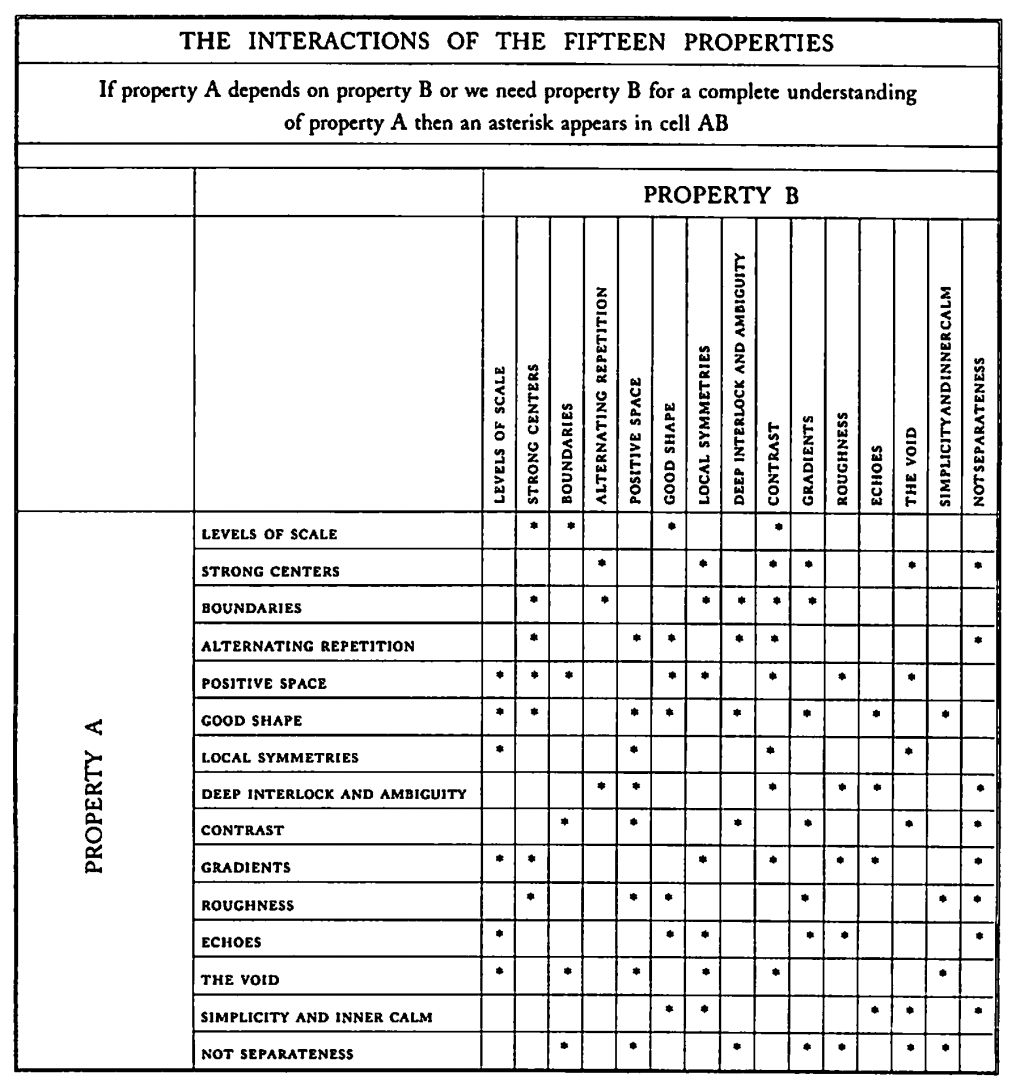 “Interactions of the properties” chart from “Fifteen Fundamental Properties in Nature” in The Nature of Order, Book 1: The Phenomenon of Life by Christopher Alexander (2002) 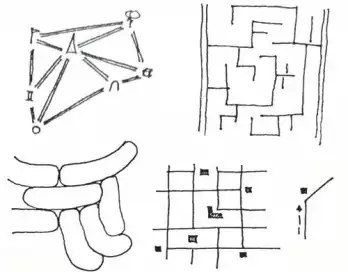 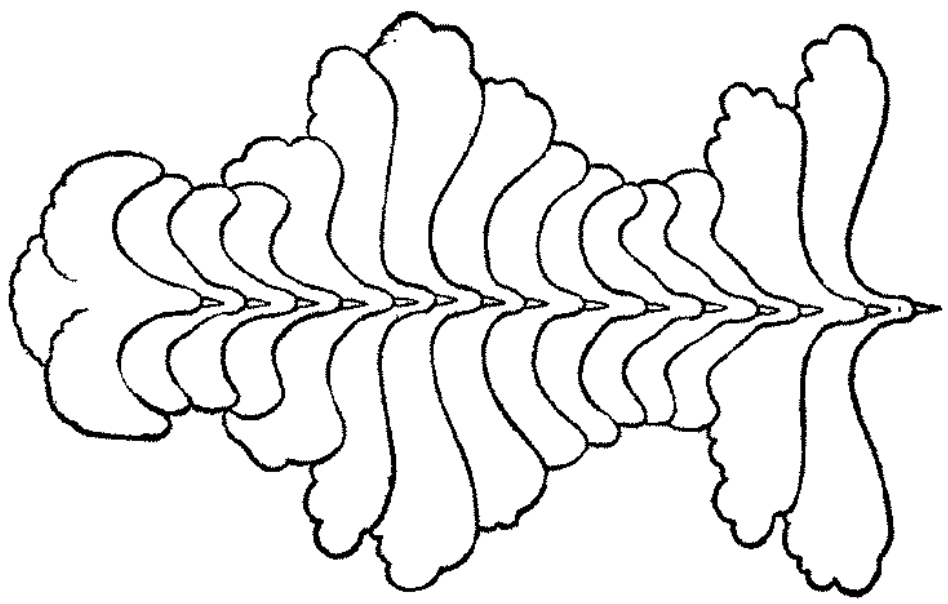 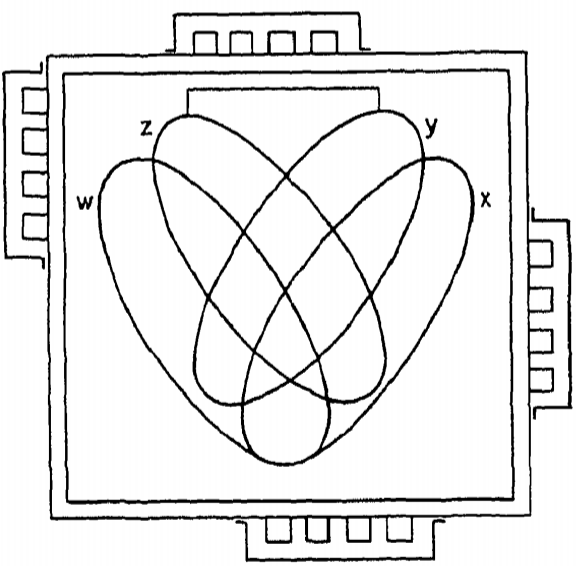 John Venn’s diagram of a “logical-diagram machine (1895),” from Logic Machines and Diagrams by Martin Gardner (1958)

The pool of diagrammatic images and symbols is a permanent part of our daily perception. […] This process always happens through the establishing of relations and through drawing connections: the structures of the semantic relationships embodied in the anatomical organization of our brains allows us to interact with others through language and behavior. Since drawing can mediate between perception and reflection, it plays a constitutive role in the production and communication of knowledge. From my perspective, the genesis of ideas is often directly connected with graphical thinking: On the one hand, many theories genuinely did and do begin with a quick draft to capture an idea (to place it for oneself or others); on the other hand, hardly any thesis rejects the forms of visual representation when communicating its contents. The drawing of figures thus reveals itself to be one of the oldest of all mankind’s cultural techniques, and remains to this day a fundamental instrument in any kind of artistic or scientific praxis.

Nikolaus Gansterer, from Drawing a Hypothesis: Figures of Thought (2011) 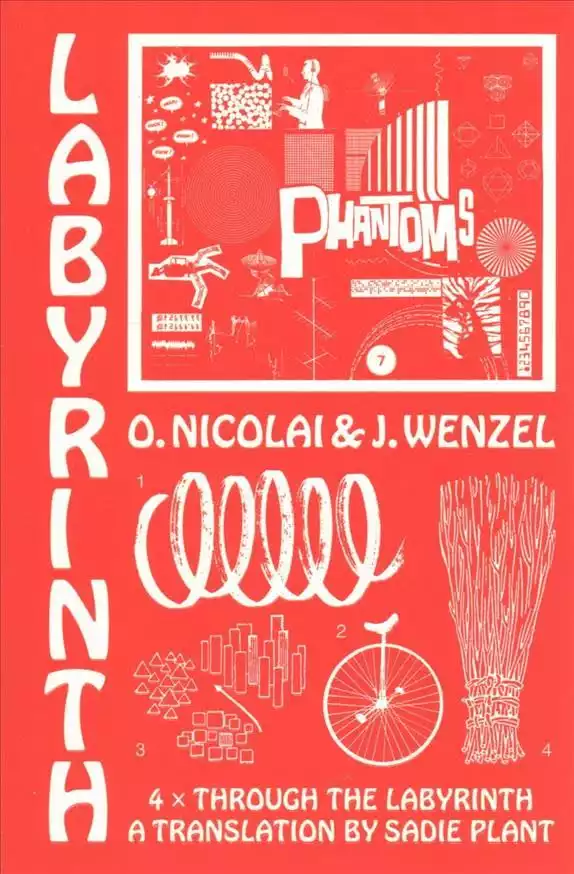 Cover for Four Times through the Labyrinth by Olaf Nicolai and Jan Wenzel, design by Urs Lehni (Rollo Press) (2013) 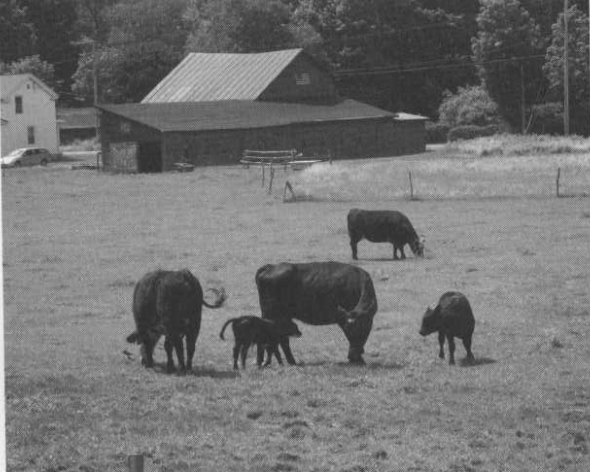